“Cherish those who seek the truth, but beware of those who find it.” ― Voltaire

2021 was another wild year, and markets were no exception, with the S&P 500 up almost 30% and US housing prices up around 20% during a period of major economic and social upheaval. There is no shortage of stories justifying these moves, from strong fundamentals, to Fed-driven liquidity, to retail exuberance, to record-low interest rates. The truth is that these stories themselves drive prices; markets are an expression of mass psychology. This has been borne out in recent years as asset prices have diverged from normal valuation ranges in what looks like a giant momentum trade or self-reinforcing “wealth bubble.” 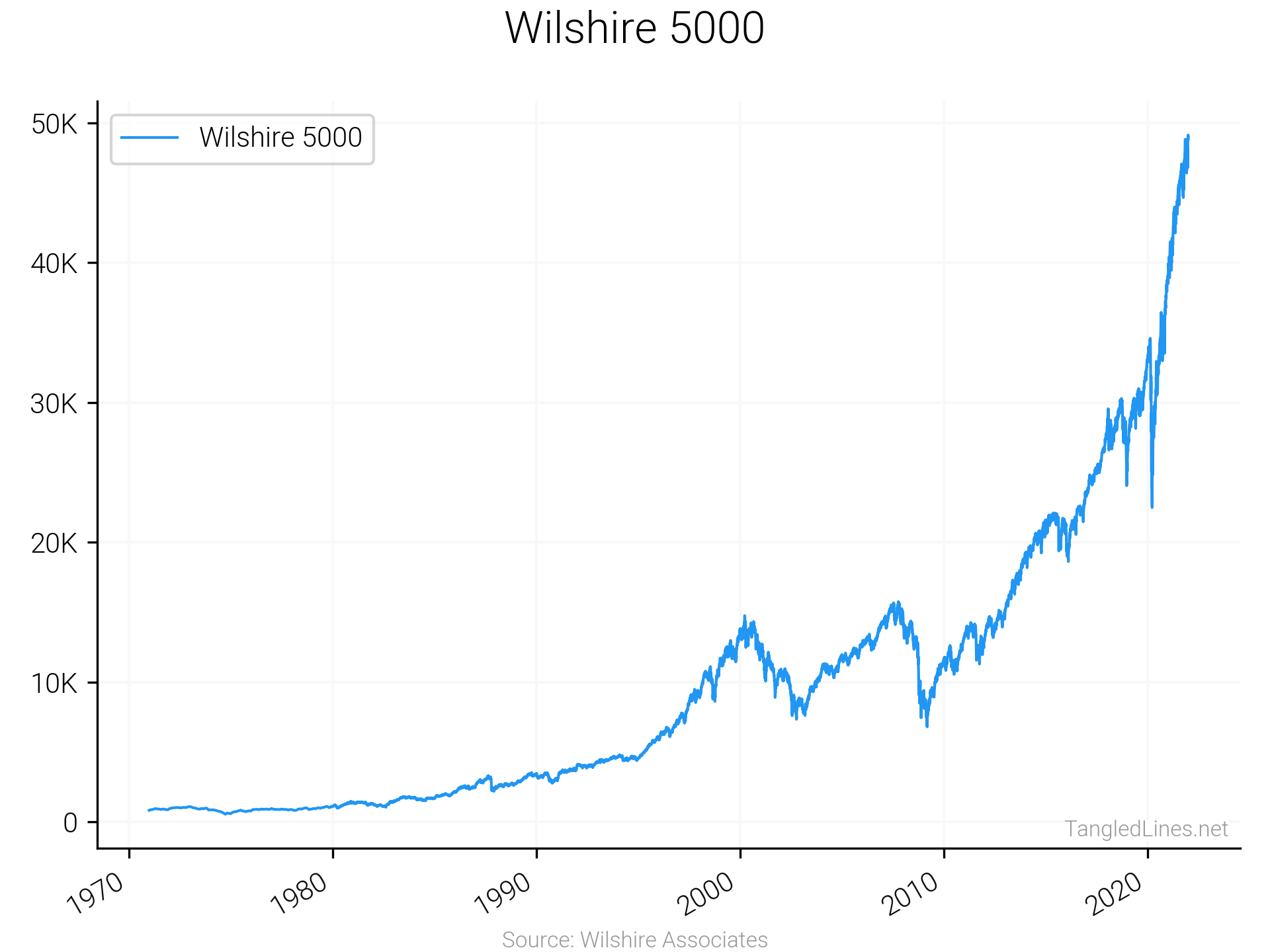 The pandemic was good for equities. Have we all really gotten richer? The Wilshire 5000 is a market-cap-weighted index of all publicly listed U.S. stocks.

Many Americans are uneasy about this situation. Although many of us are “richer,” certain parts of the story are confusing:

We own securities that are increasing in value, but are we really building financial security? Are we really “investing?” Will we have real savings for retirement?

Although many can show paper gains in our brokerage accounts, many sense that we are in a deeply unsustainable situation.

Stock market commentators usually have one of two incentives: build an audience, or talk their book. In either case, a compelling narrative is essential — and confidence is key. Big Wall Street banks make precise predictions for where markets will end the year. But as Howard Marks and others have warned, the macro situation is largely unknowable. The system is multifaceted and dynamic; and, when it comes to investing, even the best long-term capital allocators like Warren Buffett have underperformed the market in recent years. Does that mean we should stop listening them and start listening to people who’ve crushed the benchmarks buying call options on meme stocks?

I don’t think so. Performance during one idiosyncratic episode says little, and a high degree of precision and confidence is usually a red flag.

Still, decisions must be made.

Looking forward to 2022, there is a good chance the momentum in stock (and other asset) prices will continue, but there are rising risks. The conditions that created the post-pandemic boom are unlikely to hold:

There are already divergences in markets, with narrowing breadth. Some growth stocks have dropped by half due to tiny fundamental decelerations. Major geopolitical risks abound. If the main factor supporting asset prices is momentum, what happens if the momentum fades or the narrative changes?

But can’t asset prices keep rising? Of course they can.

One reason often mentioned is “cash in the system.” And there is a lot of cash in the system: 20-30% more than would be expected based on the previous trend in money supply growth. And, unlike in 2008 when the cash went largely into recapitalizing banks, much of the money this time went to individuals and businesses. Household checking accounts in America normally have less than a trillion dollars sitting in them (and before 2008, less than $500 billion). Today, Americans have $3.5 trillion sitting in their checking accounts. 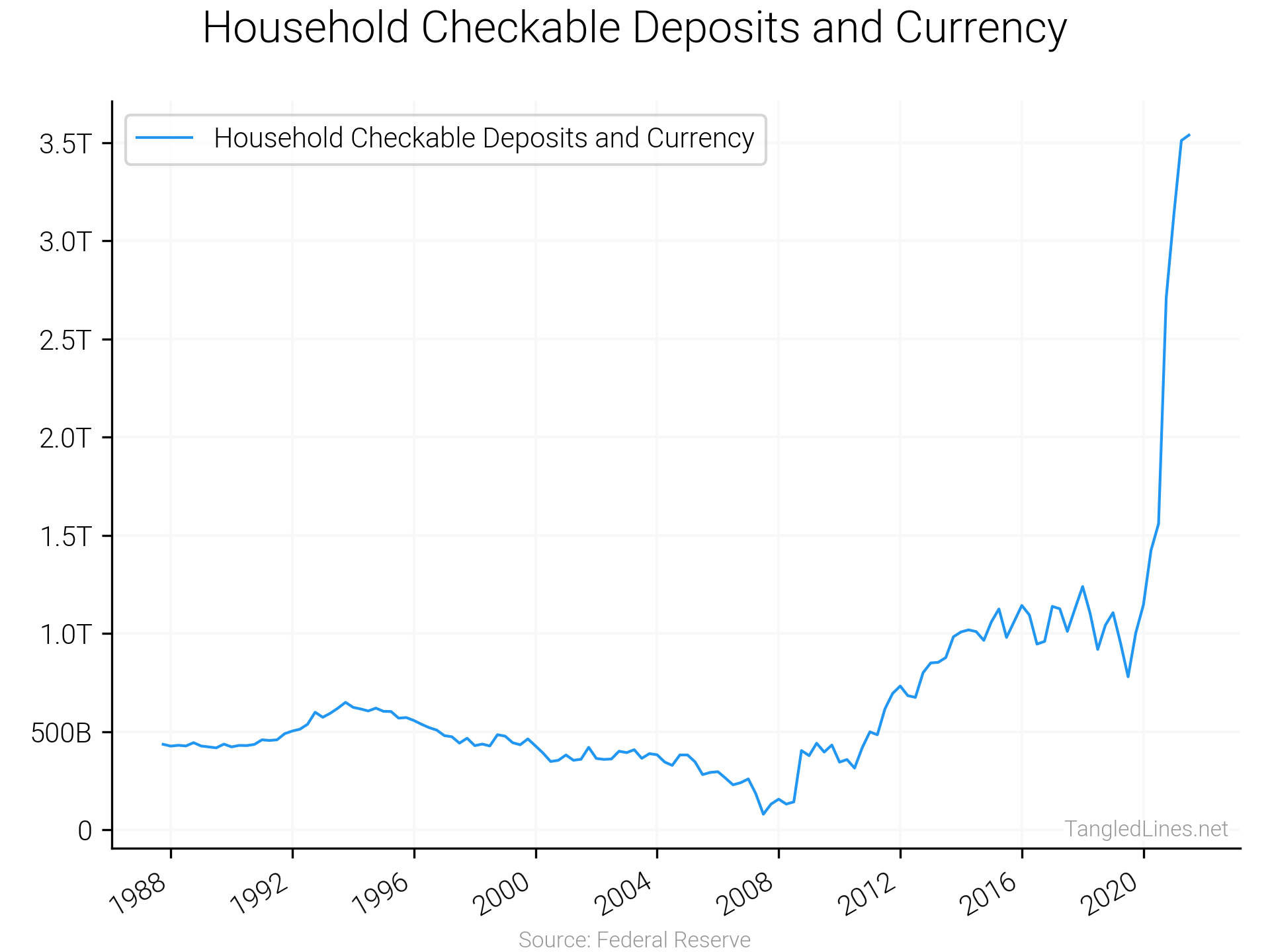 Some people talk about “money on the sidelines,” which doesn’t make much sense in a secondary market, because one person’s decision to buy is someone else’s decision to sell, which just moves the cash into a different account. But, in this process, prices can go up or down based on the where the parties agree to transact. Thus, part of the move in stocks recently could reflect the phenomenon of individual investors sitting on a lot of new cash and thinking “I should have a percent of my wealth in stocks,” and then bidding up the prices of stocks to a level that makes their asset allocation reflect this. It’s possible “cash in the system” is gradually being transferred to wealthier or more valuation-conscious investors who are are comfortable holding this cash at negative real rates, either because they already have significant equity exposure, or because they expect the return on non-cash assets to be (more) negative. Or it could be transferred to retirees who are spending down their savings.

One major question I have going forward is: what happens to all this cash? There is quite a bit of confusion about money supply and inflation; there are multiple schools of thought about how and why money is even created. But generally, people agree that money is created with bank lending (including central bank lending, which has been the primary source recently), and money is destroyed when bank debt is paid down. Do we expect a meaningful debt paydown in the future, given low interest rates and MMT gaining ground?

If not, maybe money supply will be at a permanently higher level, and that will support permanently higher asset prices. Of course, if this additional money supply causes inflation in goods and services and the Fed reacts by tightening, there could be major risks. In many ways, any medium term bet on the stock market is a bet on the path of inflation and the response (or lack thereof) by the Fed.

I have no idea what will happen to markets in the coming months. But I do know they’ve gone up a lot, and conditions are changing. As Jeremy Grantham pointed out last year, we are seeing many classic signs of a bubble. Yet we’re also in an unprecedented situation: essentially at the zero bound after 40 years of declining bond yields, digesting trillions of dollars of printed money, in a political environment that is deeply divided and deeply indebted (both financially and in terms of lack of investment in institutions, infrastructure, and people). We’re in financial repression, where negative real rates penalize savers; does this mean we all simply move into financial assets and get rich? That seems too easy — but it’s been the case so far. 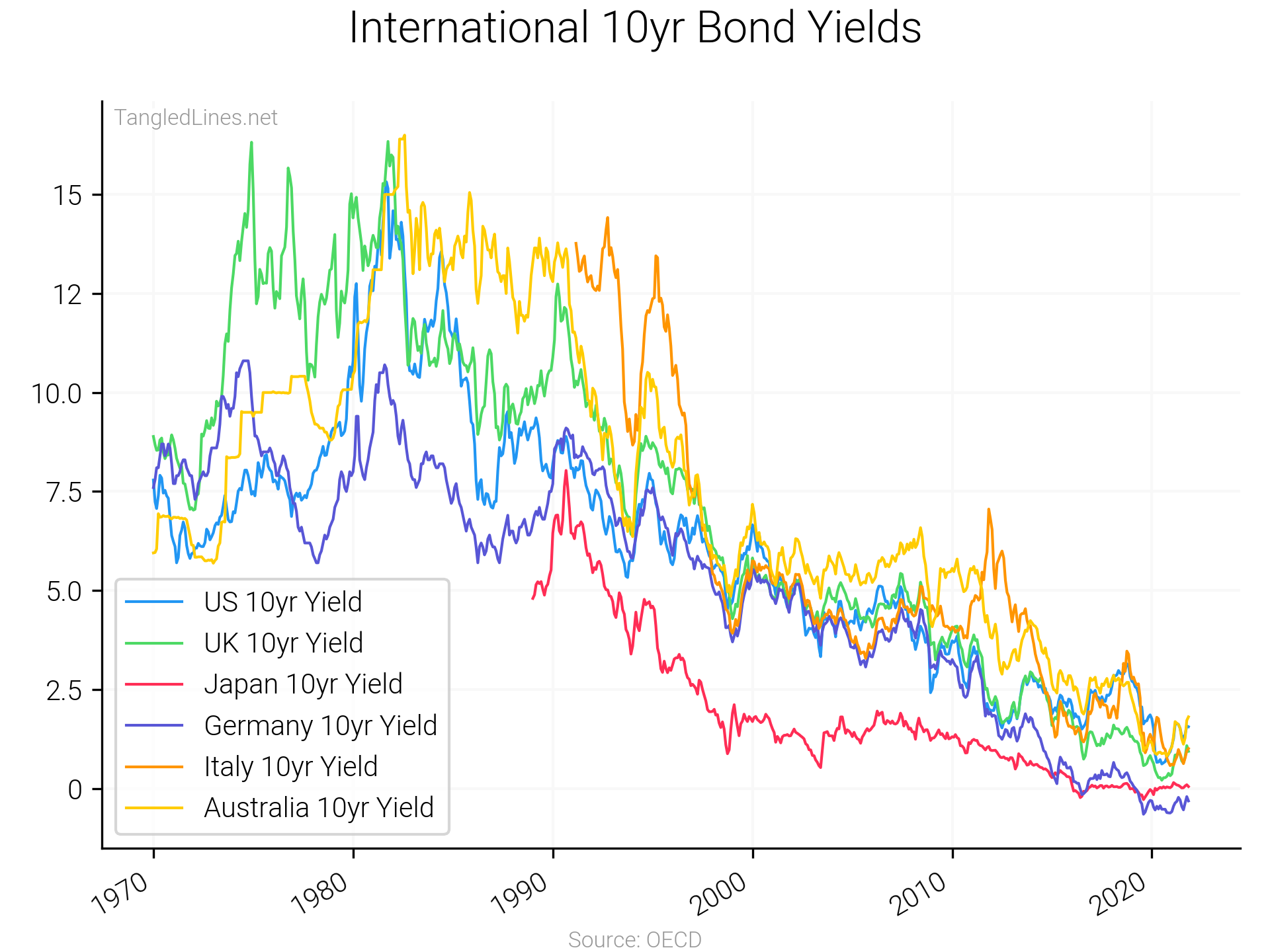 Nominal interest rates can’t go much lower. What happens when a 40 year trend comes to an end?

I’m positioned cautiously going into the year, roughly net neutral, with lots of pair trades and puts on high-multiple growth stocks (especially where peers have dropped). I believe that if “buy the dip” fails and the broader markets really turn down, it could be sharp and violent given that there is little valuation support and lots of leverage in the system. But not everything is expensive. I’m bullish on parts of the energy complex – especially watching the crisis in Europe, where it is clear that intermittency is a huge challenge to the energy transition, and LNG and green hydrogen must be be part of the mix. Some midstream energy companies have excellent fundamentals and will likely have a place in the green economy.

For me, the risks of a major drawdown outweigh the potential benefits of another big up year. When the tech bubble burst in 2001, it took 12 years for markets to fully recover losses and move sustainably higher. While I’m concerned asset inflation could reverse, I think real inflation could easily remain higher than expected. I’ve been pulling forward big ticket spending under the assumption that prices are going up; this is my solution to the TINA (“there is no alternative”) argument… if there are no safe investments, one alternative is to save less and spend more. Many people seem to be saving less by working less, which is also rational if you believe real returns on savings will be low or negative. I’ve also started gardening as an antidote to food inflation and hyperreality. (My arugula harvests are not being reflected in official GDP or PCE numbers.) 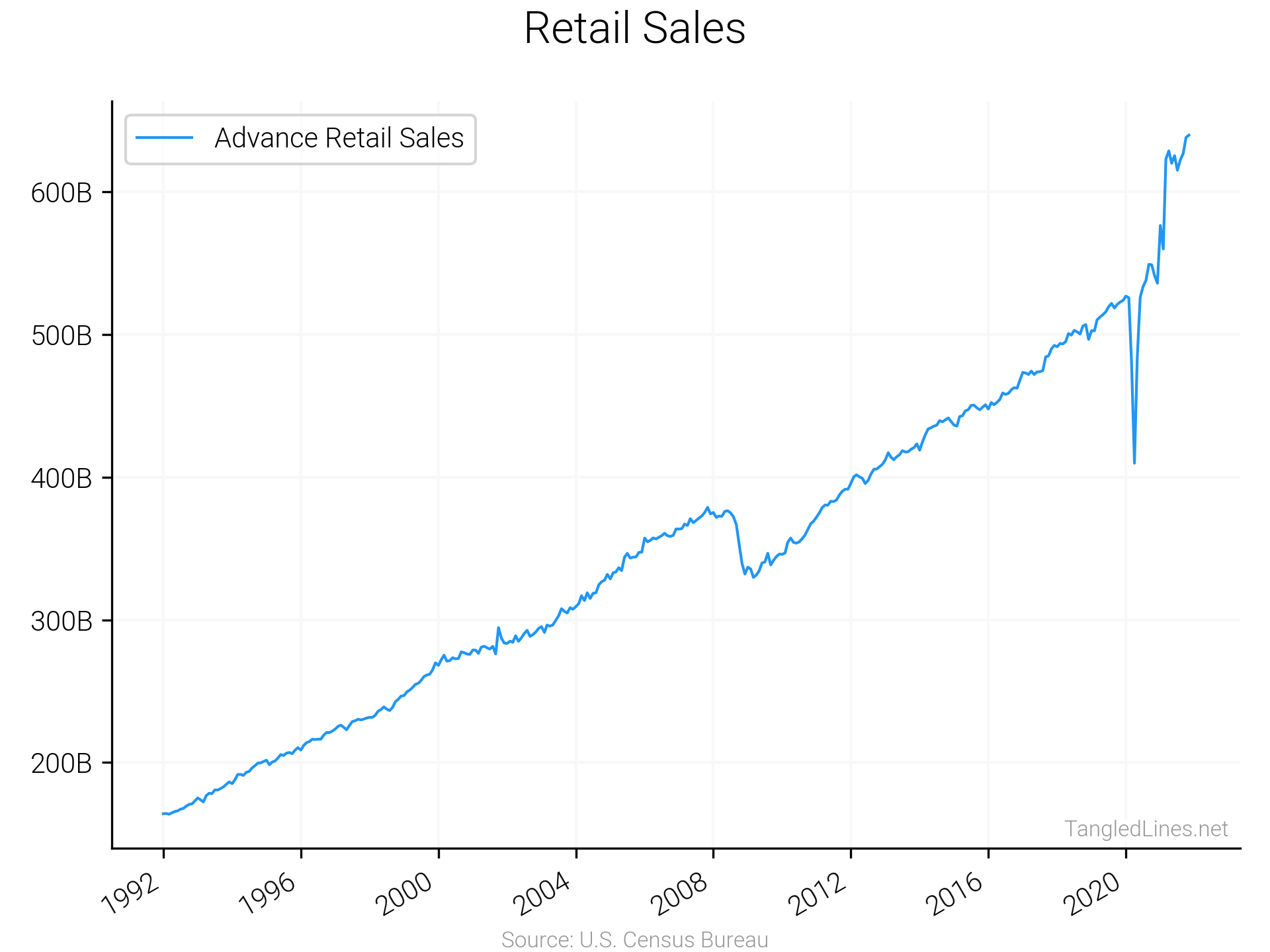 I’m not the only one spending money. During an unprecedented economic shutdown, monthly retail sales have jumped and have stayed elevated. The average American household went from spending ~$4,000 per month before 2020 to ~$5,000 per month today.

Big picture, I believe we are in a wealth bubble, and that the high returns many of us see in our brokerage accounts are likely to be “risk-adjusted” at some point as trends mean-revert. This could be painful, as the wealth effect works both ways. It’s happened before.

When could it happen this time? It’s anyone’s guess. But ultimately it will depend on the stories we tell ourselves, and the truths we choose to believe.

Sign up for Tangled Lines to get updates on the charts above and occasional written posts.

Interest Rate Realness
In the United States, we have: Record fiscal stimulus Record Federal debt GDP growth we haven’t seen in decades Inflation readings well over Fed …
What is this?
Maybe a better question to start with is who is this? I’m Justin. I started my career in the stock market, and then I …
© Tangled Lines 2020

Nothing presented on this site constitutes financial advice.
No guarantees are made for the reliability or correctness of any data presented.