In the United States, we have:

So why are 10 Year US Treasury yields going down? 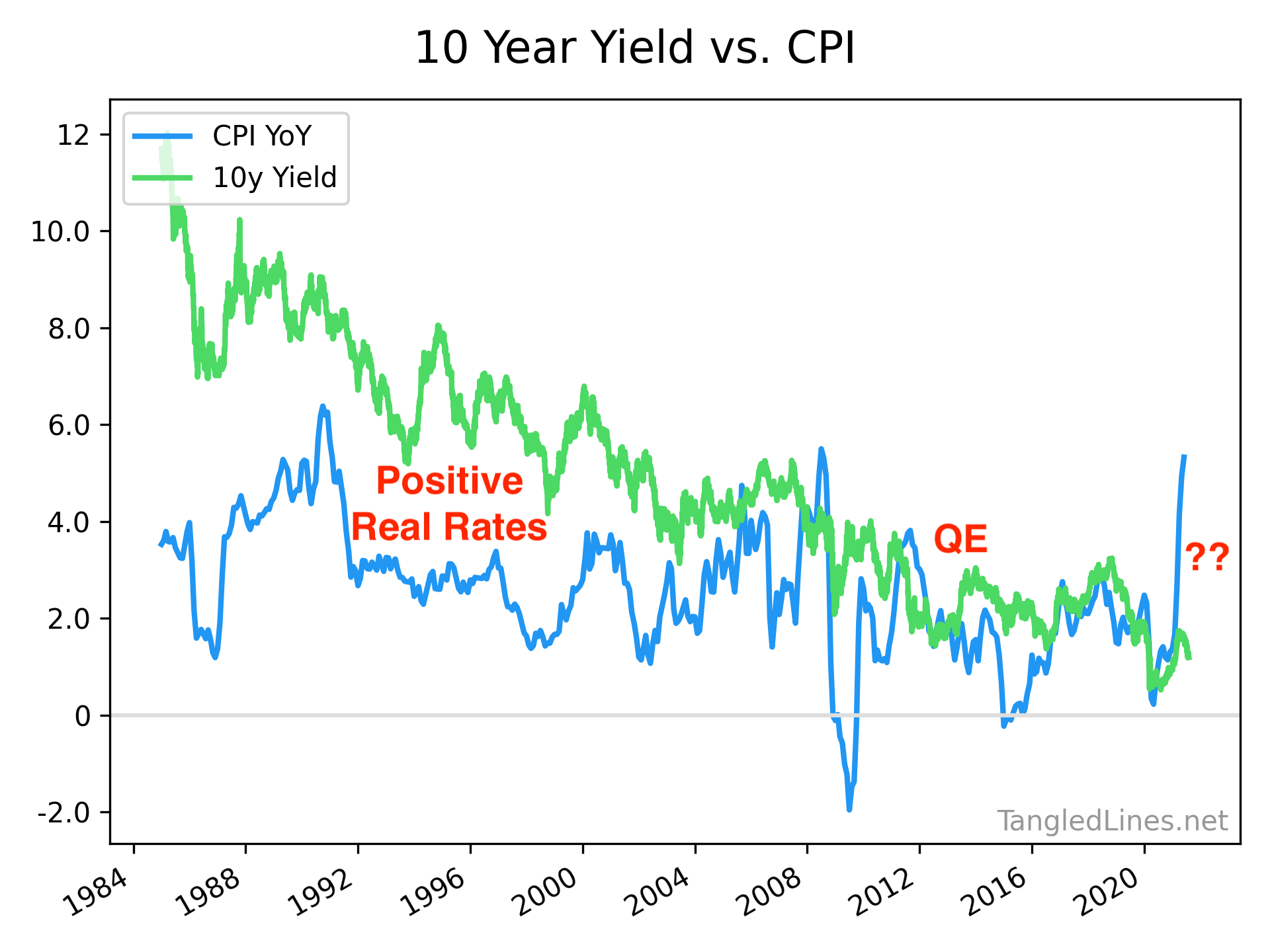 USTs are now yielding negative real rates after inflation. The 10 Year is even below the Fed’s 2% inflation target.

It’s one of the biggest puzzles in the markets, and the resolution will affect all assets, because the only remaining justification for high asset prices is the “excess CAPE” argument, which says stocks are at least yielding more than US Treasuries (USTs), which now have negative real yields.

The whole yield curve is dropping and flattening, indicating dimming expectations for growth, reflation, and the prospect of “shot girl summer” heralding us back into “normal times.” Does the bond market know something about the US economy that it’s trying to tell us?

I don’t think it does.

There are many stories about what is causing yields to fall – like the Delta variant (which is now moderating in the UK), or the idea that the Fed may make a “mistake” by raising (which should also affect equities, but they are at record highs), or pension funds rebalancing (which can’t go on forever), or a short squeeze (in one of the largest and most liquid asset markets).

One explanation makes a lot more sense: supply and demand, mixed with inflexible policy. After the coronavirus hit the United States, the Treasury raised trillions of dollars by selling debt, largely to the Fed (via brokers). It dramatically inflated its checking account (held at the Fed), the Treasury General Account (TGA), where it collects tax receipts and makes payments for federal programs. 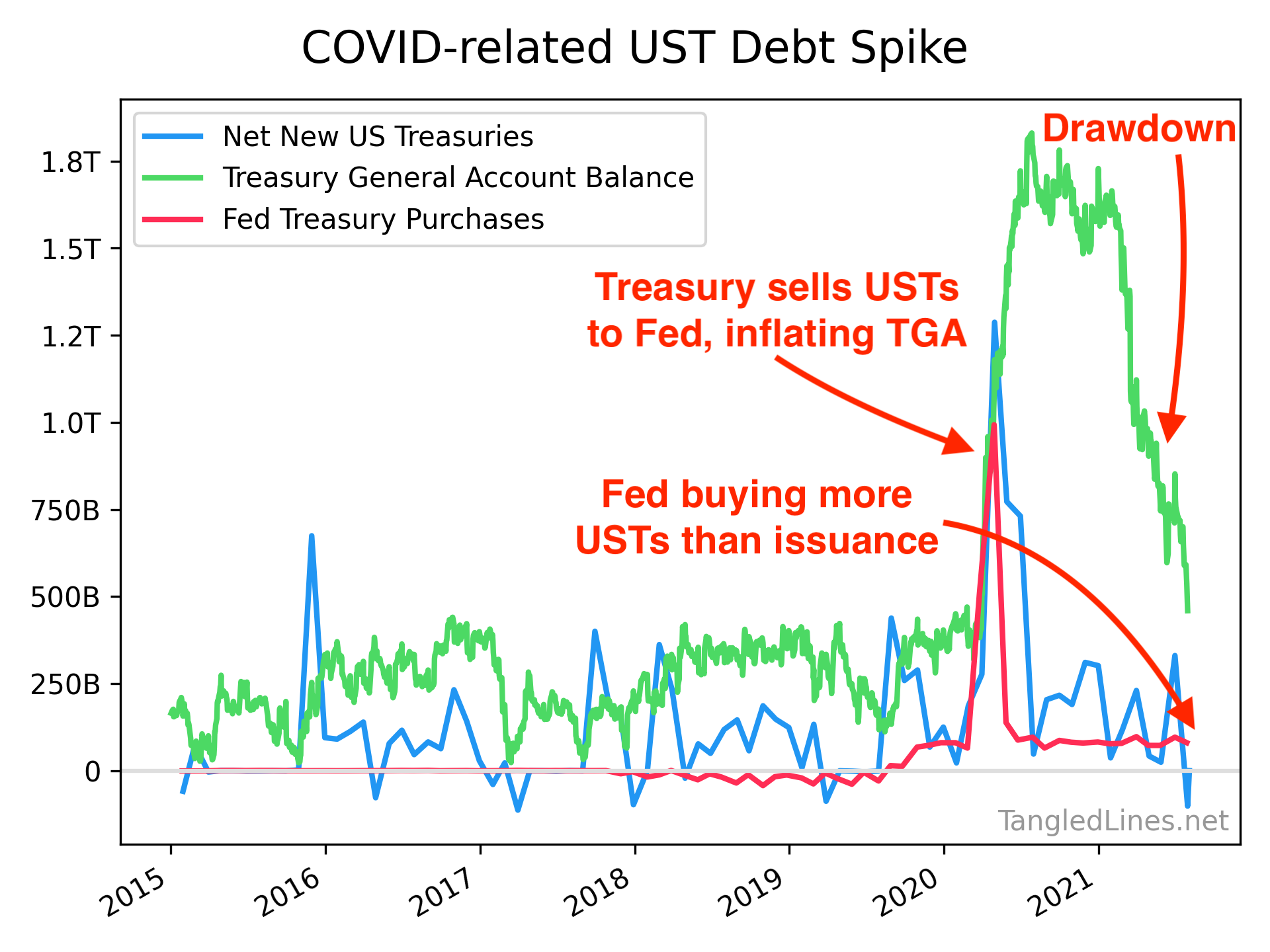 The Treasury’s checking account spiked with new debt issuance. But the drawdown caused net UST issuance to go negative – yet the Fed was stuck buying a fixed amount of USTs.

The Treasury announced that it wanted to “drawdown” the TGA back to $500 billion, in line with historical norms, by the end of June. In spite of record spending, this didn’t happen, which is surprising, and only now in early August are we closing in on a normalized level. But to get there, net UST issuance (new issuance beyond rolling over redemptions) went negative. The Fed had already committed to buying $80 billion of USTs per month to support the economy. By keeping its promise, the Fed has recently been buying more USTs than are being newly created.

When the Fed and Treasury work together

Zooming out, we can see that previous times this happened are associated with drops in the 10 Year yield. But the bigger impact may be from the drawdown itself. The TGA used to be held at commercial banks, not the Fed, but in 2008 the Treasury changed its bank to the Fed, which means that now, when the Treasury spends money on programs, it creates new bank reserves, which in turn creates money supply and liquidity. In a world of “fiscal dominance,” the TGA may be the conduit (and bottleneck) of Fed efforts to affect rates and money supply. Delayed effects of emergency Fed purchases are now coming through with the TGA drawdown. 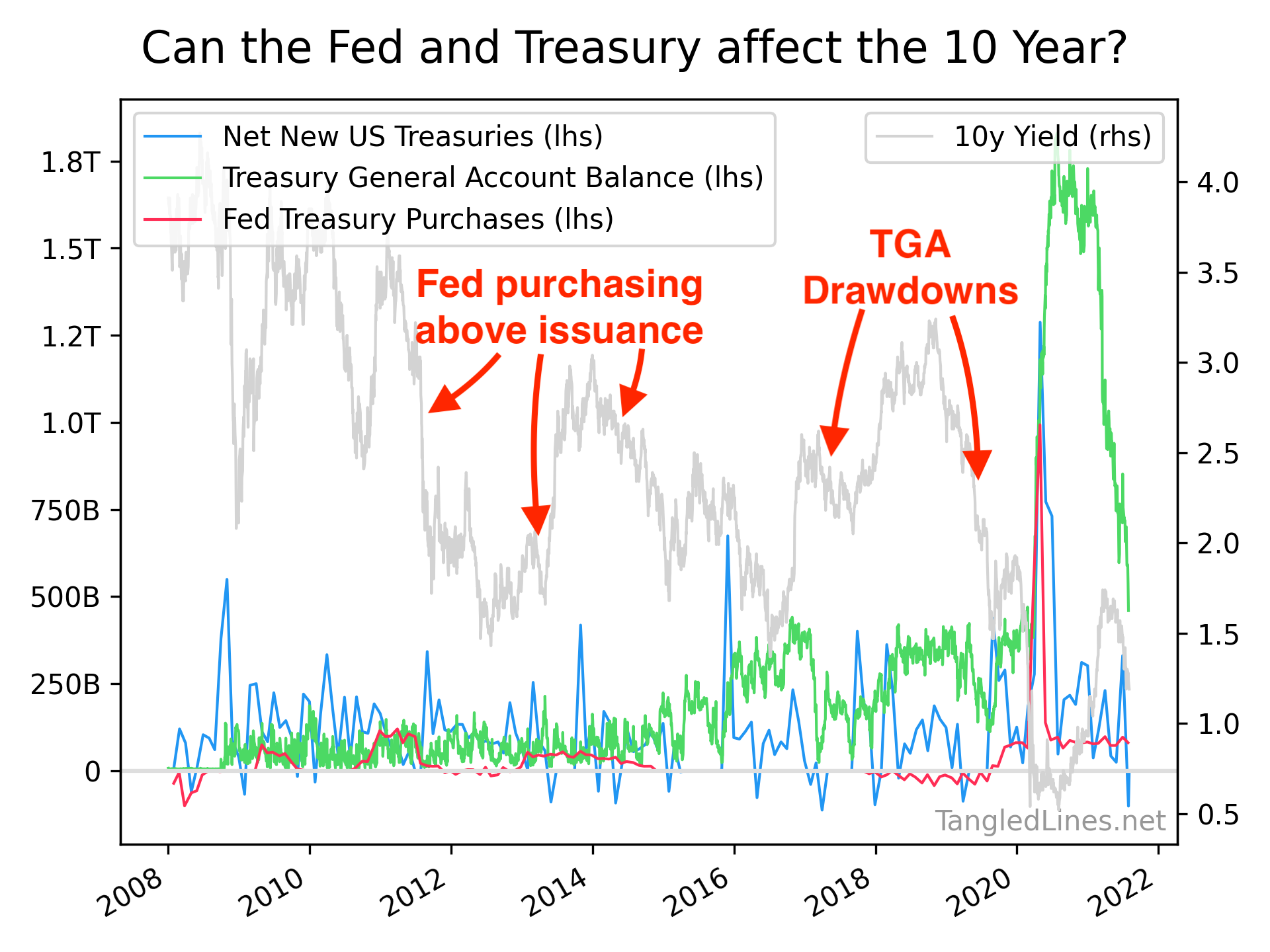 The TGA buildup and Fed action has been unprecedented. But recent drawdowns have also been associated with falling yields.

Previous drawdowns happened during big declines in the 10 Year yield. Conventional wisdom says that flooding the markets with liquidity should affect the short end of the yield curve, but this end is already firmly pinned at zero. It’s no surprise the longer end of the curve is now being affected. 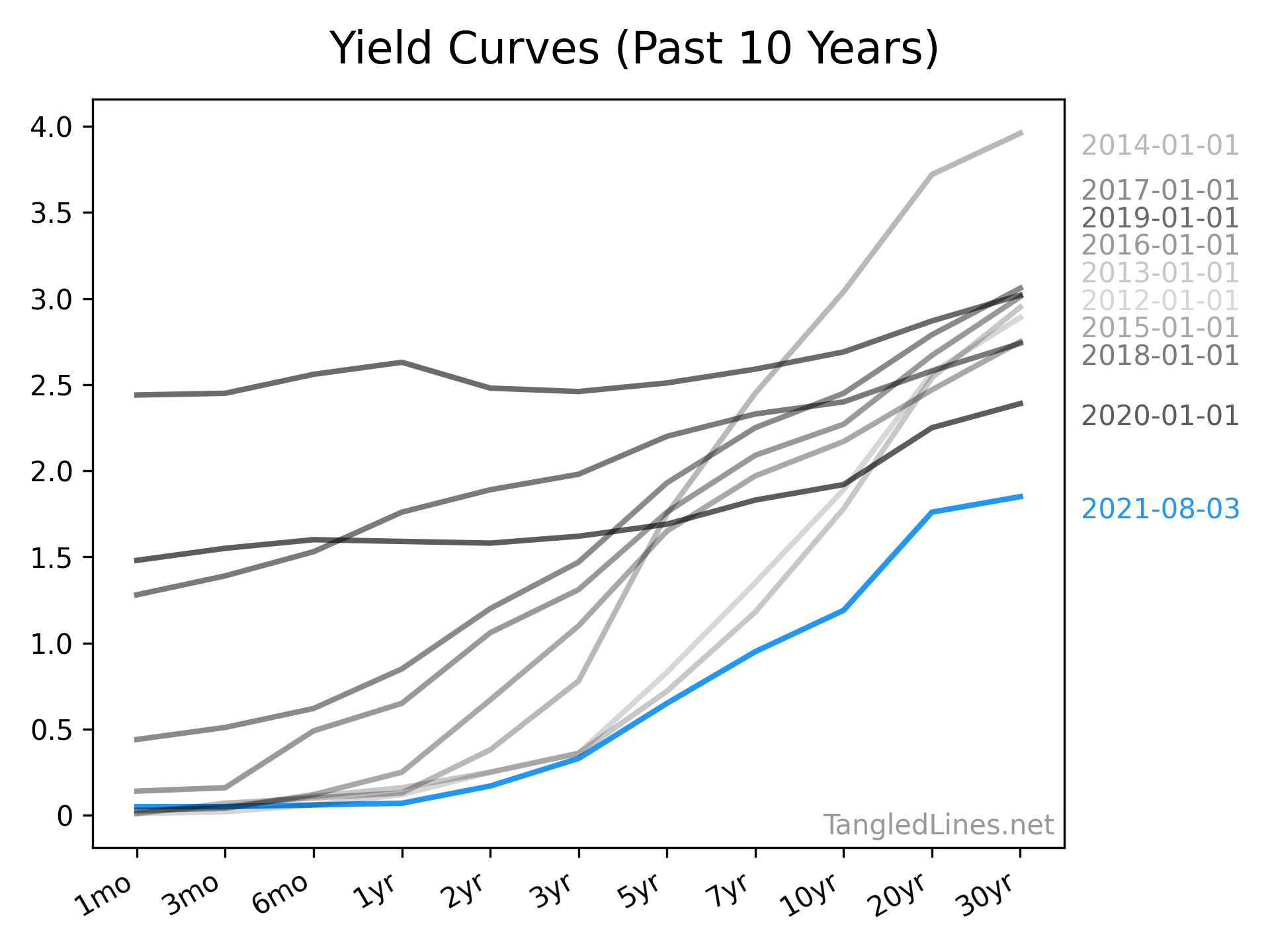 The yield curve is flat and low. But does it reflect real price discovery?

Beyond all the macroeconomic conjectures about the Fed, liquidity, money supply, and asset price inflation, there are two key takeaways from the charts above:

My guess is that yields rise back toward 2% into the fall as (some) price discovery resumes. And if high inflation proves to be more-than-transitory, yields are sure to rise.

But the bottom line, for both current and future yields, is that “price discovery” isn’t what it used to be. The weight of government policy (whether intended or incidental) affects yields – even longer term yields.

And the effects aren’t over. Recent arguments for a “standing repo” facility sound a lot like yield curve control, but the US may not have the luxury of replicating the Japanese experience or the Fed/Treasury coordination that happened in the 1940s. I’ll discuss these ideas in a future post.

This isn’t just a blog. You can get regular updates on the metrics shown above by subscribing. You’ll also get updates on new posts.

Does the debt ceiling affect markets?
Another day, another debt ceiling circus. The US Treasury has maxed out its congressionally-set debt limit again. It’s nothing new — since 2010, we’ve …
What is this?
Maybe a better question to start with is who is this? I’m Justin. I started my career in the stock market, and then I …
© Tangled Lines 2020