Another day, another debt ceiling circus. The US Treasury has maxed out its congressionally-set debt limit again. It’s nothing new — since 2010, we’ve been dealing with debt ceiling episodes 28% of the time* (see shaded areas below).

The federal deficit, which must be paid for with new debt, has been recently running at 15% of GDP (up from mid-single-digits through the 2010s). With this magnitude of debt, it seems like blocking new issuance could have some impact on markets, so I looked at previous episodes, represented by the shaded areas below: 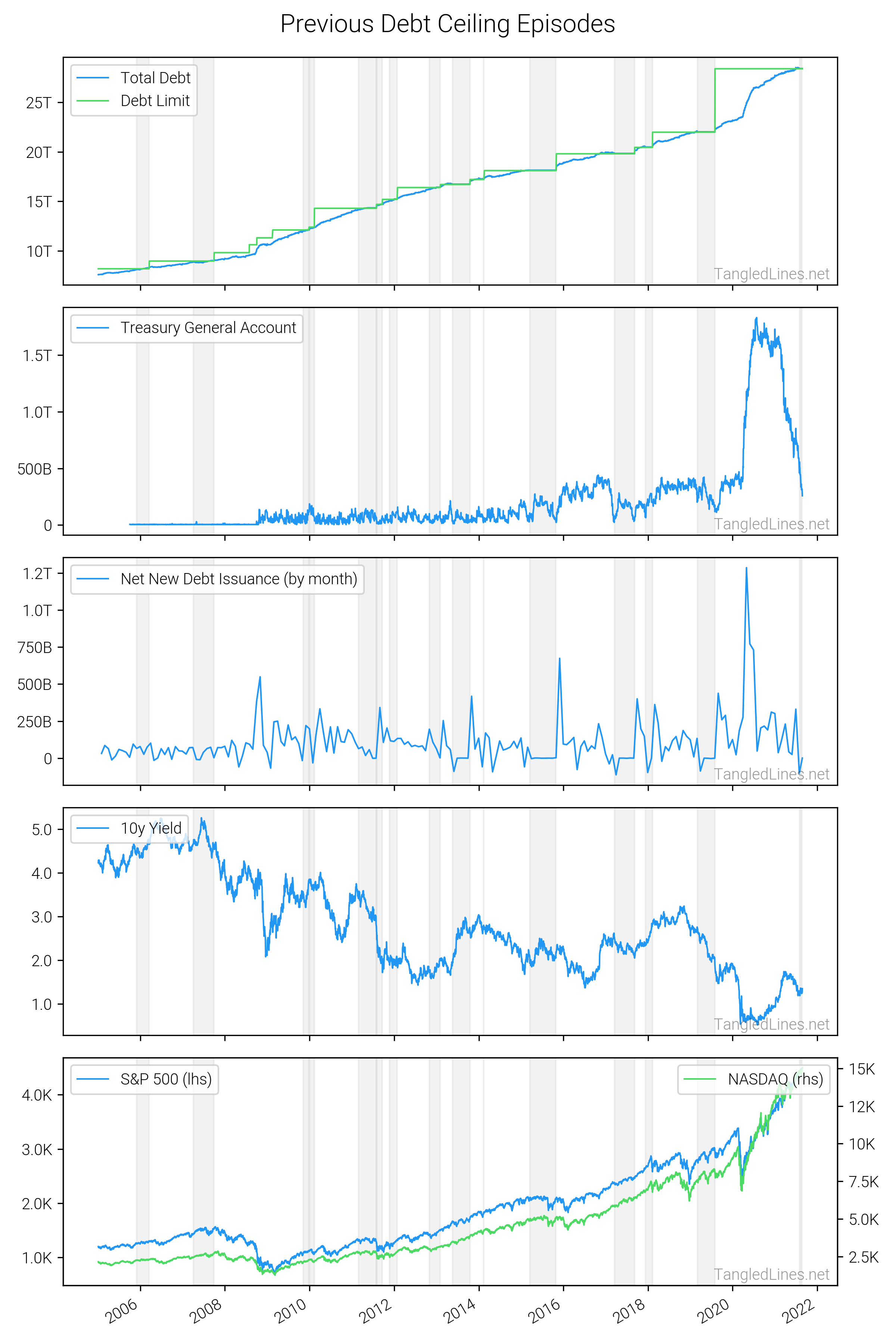 As legally mandated, federal debt flatlines during debt ceiling episodes. The Treasury General Account (the government’s checking account held at the Fed), drops during longer episodes and new debt issuance spikes after the ceiling is raised.

My main question was if this blockage-then-flood of new debt could influence the 10 year yield, and possibly equity markets in general. I found a minimal impact. Looking at the longest episodes, many saw a small uptick of 10 year yields during the post-ceiling spike in issuance, and a tick down in markets, but the overall trends in both series are unchanged.

It looks like the US Treasury market is healthy enough to weather some political grandstanding. The fact that there are constantly redemptions and issuance to roll over existing debt certainly helps.

Will this time be different? It’s possible 10 year yields may be artificially depressed due to unprecedented Treasury and Fed actions. Inflation is running above-trend and the real 10 year yield is negative, so it will be interesting to see what happens when net new issuance is allowed to resume.

*Debt ceiling episodes (shaded areas in the chart above) are defined as federal debt being within 1% of the limit for at least 30 days:

Interest Rate Realness
In the United States, we have: Record fiscal stimulus Record Federal debt GDP growth we haven’t seen in decades Inflation readings well over Fed …
What is this?
Maybe a better question to start with is who is this? I’m Justin. I started my career in the stock market, and then I …
© Tangled Lines 2020